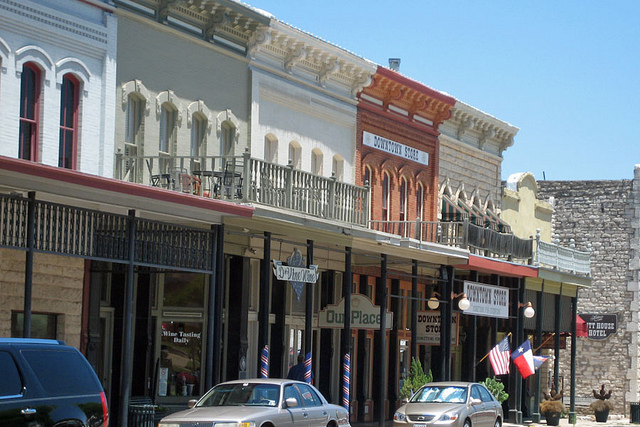 Nestled approximately 35 miles southwest of Fort Worth, Granbury is an easy getaway from the Metroplex.  Granbury boasts a culturally rich community with over 11 fine art galleries, a community theatre, eclectic boutiques and eateries. The Downtown Square, the first town square in Texas to be listed on the National Register of Historic Places, has become a prototype for restoration projects all over America. There are eight festivals a year, some with strollers who dress in costumes from various historic periods from the Civil War to the early 20th century.

Founded in 1860, Granbury, Texas started as a town square with a log cabin courthouse. Today, Granbury remains to be a relatively quiet town, however full with just the right amount of charm and grace.  The Hood County Courthouse, now the town landmark, offers the kind of stately architecture that makes one proud to be a Texan. Built with Brazos River limestone, the courthouse was finished in 1891. The building was designed in the Second Empire style by noted Texas courthouse architect W.C. Dodson of Waco, Texas.

Granbury proper and the Hood County area is where Texas history lives. Following the end of the Texas Revolution against Mexico, Davy Crockett’s wife, Elizabeth settled in Hood County as many of the those who participated received Texas land grants.  She is buried in the neighboring Acton State Historic Site, in what is the smallest state park in Texas. Today, several of Crockett’s descendants still reside in Hood County. In addition, its recorded that one of the most fascinating wild west outlaws, Jesse James, took his final rest here.  The James family descendents have dedicated a headstone in the Granbury Cemetery to allow for visitation and to honor his life.

Search Your For Your Favorite Wine

Please note that D'Vine Wine can only ship to approved states. Shipping to the following states is prohibited by law. MS, AL, GA, OK, and MT